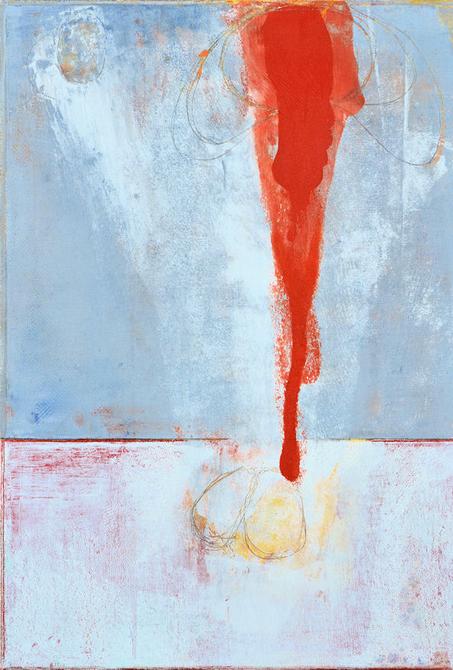 ​
Michael Bisbee's paintings are part of an ongoing series of abstract paintings begun in 2008 shortly after moving to the desert of the Southwest from the East Coast. The series has a working title “Trouble at Sea” and comes from contemplating the sensation that making abstract painting in a remote New Mexican village is like assembling a serviceable raft from the wreckage of a ship far out at sea. The format has been limited to 20 X 14 inches, or assembled units of that dimension with most employing a horizon line.

The photographs in this exhibit are frontal studies of assembled sculptural objects. The images, shot out of focus, provide a certain anonymity to the subjects which contradicts the basic promise of the camera as a device designed to render the world in authoritative detail. This series stems from Bisbee's experience with a dropped Nikon camera that would no longer focus, as well as his distaste for chasing the newest and most improved lenses and sensors.

Michael K. Bisbee is an artist who has worked with a variety of media and currently resides in Socorro County, New Mexico. His work has been exhibited at The Hirshhorn Museum, THE LAND/gallery, Art In General, 516 Arts and other nonprofit settings. He is the recipient of grants including NEA and NYFA fellowships. Additionally he has exhibited in commercial galleries in NYC, Washington, Chicago, Santa Fe and LA. For more information, pricing and or to make an appointment contact Catherine DeMaria. cdemaria@warehouse110.com​