Gassoumis, born to first generation Greek immigrants in Oakland, California, was raised in the creative vitality of the Bay Area “art scene.” He was inspired by such painters as Rembrandt, the impressionists and Richard Diebenkorn, one of the inspirations the “Bay Area Abstract Painting Movement” and the “First Generation Figurative Movement.” .” Gassoumis kept these themes throughout his career, applying this genre to his landscapes, portraits, and classical themes.
​He received his Master’s in Fine Arts from the California College of Arts and Crafts in 1958, now known as CCA California College of Arts. In 1979 Gassoumis was invited by painter Mary Snowden, then head of CCA Painting and Drawing Program, to teach a course in “Color and Composition.”

In 1959, Gassoumis moved to Greece with his first wife Carolyn to paint and raise a family on the island of Hydra; birthplace to his mother. There they had two daughters Athena and Cassandra. Upon his arrival Gassoumis was given a studio by the Greek painter Pericles Byzantios at the School of Fine Art on Hydra. Gassoumis would later purchase and began an extensive redesign of a home on Hydra incorporating all the trappings of his earlier life in California including the first lawn and swimming pool to exist on the island. The house became the subject of several magazine publications across Europe.
In the early 1960’s, Hydra quickly became known as a bohemian community and haven for artists, writers, and poets such as, Leonard Cohen, Bim Wallis, George Johnston, Charmian Clift and others. Later, artists such as Brice Marden joined the expanding international Hydra “artist community.” 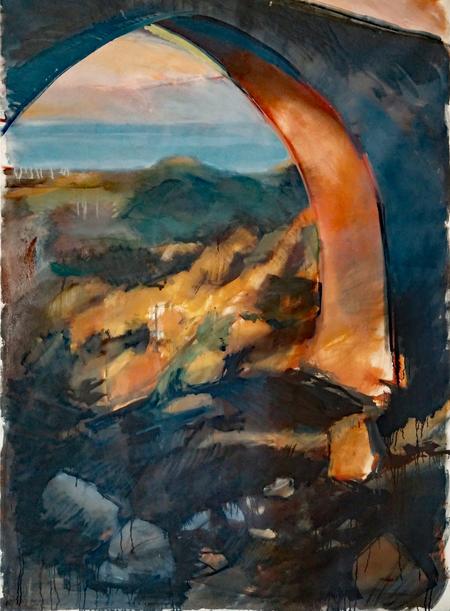 ​During his time in California, Gassoumis was sought by interior designers for his unique and elegant eye in creating murals and paintings for homes and hotels. One of his closest interior design collaborators in the late 1970’s and 1980’s was the late high couture and interior designer Richard Tam, from the Bay area in California. Once back in Greece Gassoumis was commissioned to create a large mural for the construction of the famous Porto Carras Hotel.
Gassoumis developed a dedicated following of private collectors from around the world and had major exhibitions in Greece, at the Historical Archive Museum of Hydra, The Koundouriotis Mansion Museum (an outpost of the National Museum of Athena), the Melina Mercouri Gallery, and the Hydra Gallery in June of 2014. A retrospect of his work along with artifacts from his home on Hydra were recently exhibited at the Historical Archive  Museum of Hydra.

One of Greece’s premier painters, Panayiotis Tetsis, a Hydra born artist, describes Gassoumis’ work as “a very beautiful example of robust painting.” Tetsis, who is a professor of painting and dean of the School of Fine Arts in Athens, writes: “The integrity, strength and sensitivity of his paintings are his virtues.” (see full article from WWD 09/29/2008: Pete Born)

Recent writings about the artist’s life are included in the 2018 book Half the Perfect World (Paul Genoni and Tanya Dalziell) capturing the Post-War Bohemian life of Artists living on the Greek Island of Hydra, 1955-1964.
And Grecian Form, WWD 9/29/08 by Peter Born

Gassoumis moved back to the US in the mid 1960’s, painting in his New York City lower East side studio, located on Ludlow and Stanton Street. Gassoumis experimented creatively, developing a delicate three-dimensional portrait system out of paper, which focused on capturing the negative projected light of a photograph and creating a positive imagine. These pieces were widely successful as personal portraits and classical images of Icarus, the Elgin Marbles and of Leda and the Swan. During this era of experimentation in New York City, Gassoumis was commissioned by Ellen Stuart of La MaMa Theater, to create sets for a 1972 Venice Biennale Exhibition. During this time, Gassoumis could often be found at Max’s Kanas City with artists such young Mapplethorpe and Andy Warhol (who later photographed Gassoumis’ daughter, Athena, for French Vogue).
Through the mid 60’s to early 70’s Gassoumis had several solo exhibitions in New York at the Max Hutchinson Gallery-Soho and the earlier form of the Dorsky Gallery. Gassoumis left New York in 1973 and moved back to Greece, spending his life thereafter, traveling between Hydra, Greece and Los Angeles, California. When in California Gassoumis also spent considerable time in Calistoga where the surrounding landscape became the subject of multiple paintings. 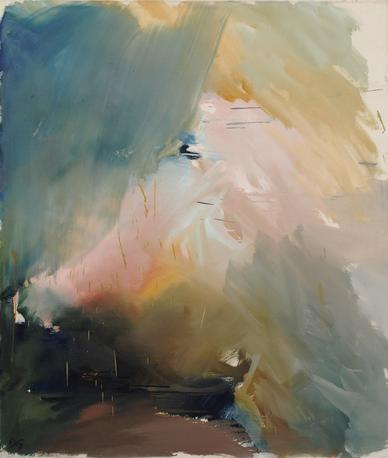 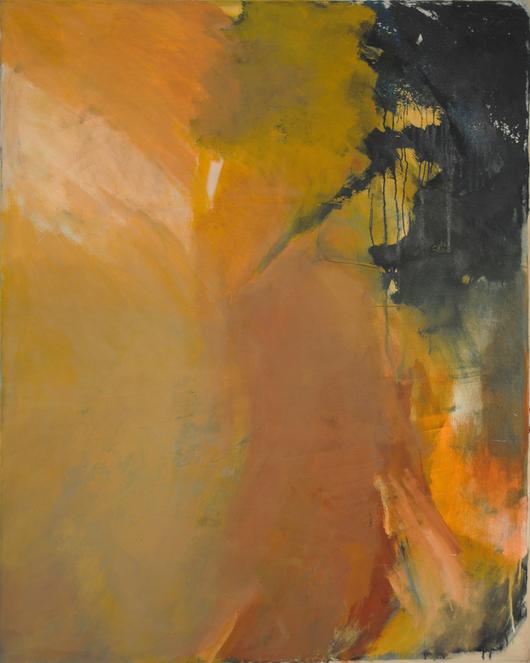 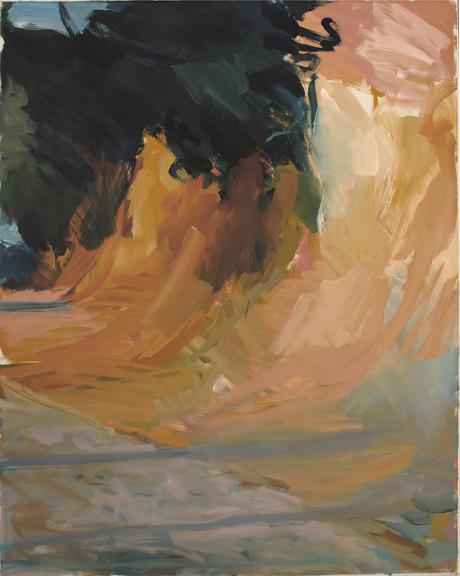 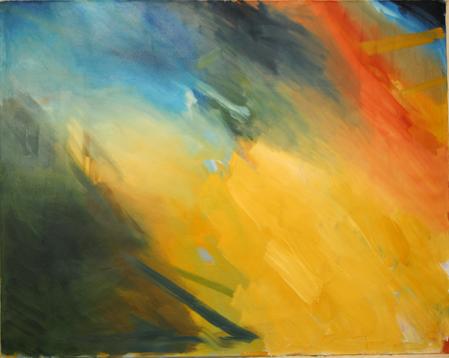 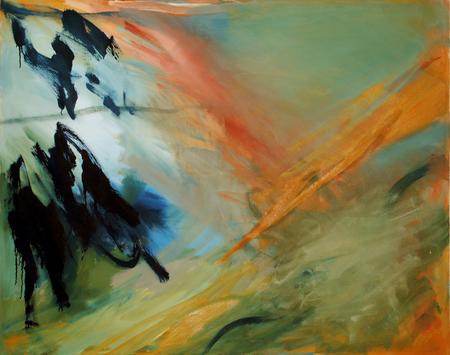 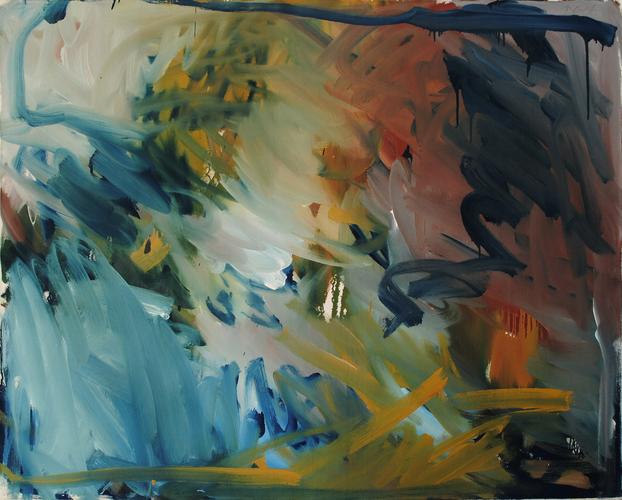 Warehouse 1-10 is please to represent the Estate of the Greek-American Painter Demetri Gassoumis a master of oil paint and a technician of magical light and elegant space:

Gassoumis created works which brought color to its fullest potential with a natural elegance and ability to capture a journey for the viewer, whether a segment of a path or an abstracted view of the ocean. The viewer is teased by the beauty and mystery and left wanting to step into this world of magical color and texture. Gassoumis created color fields utilizing only four colors, Prussian blue, yellow ochre, Venetian red and white. Mixing color from this minimal pallet, saying, “it’s about moving the paint and capturing the light.” Gassoumis was able to blend and shift color into representational and natural abstractions, with interplay between the canvas, paint, light, and strokes of genius. ​ 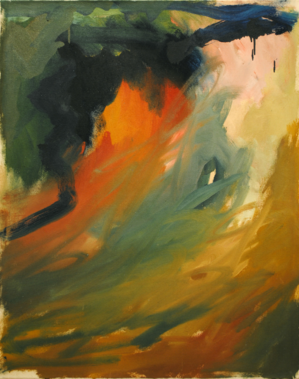 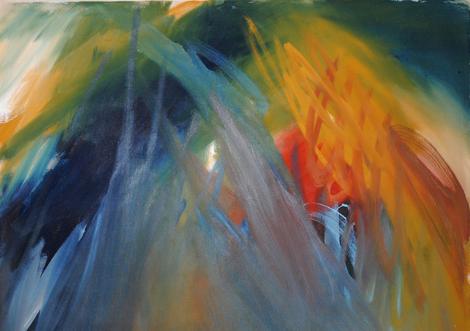